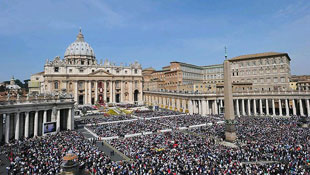 The Holy See is the ecclesiastical jurisdiction of the Catholic Church in Roman, the episcopal see of the Bishop of Rome—the Pope.  It is the central point of reference for the church everywhere and the focal point of communion due to its prominence. It traces its origin to the apostolic ear, when Stain Peter arrived in Rome to evangelize, thus forming a community of believers there which maintained a significant Christian presence. Today, it is responsible for the governance of the faithful, organized in their local Christian communities.

The Holy See is viewed as analogous to a sovereign state, having a centralized government called the Roman Curia with the Secretary of State and its chief administrator and various departments essential to administration comparable to ministries and executive departments. It enters diplomatic relations with states, and has Vatican City as its sovereign territory.

Diplomatically, the Holy See acts and speaks for the whole church. It is also recognized by other subjects of international law as a sovereign entity, headed by the Pope, with which diplomatic relations can be maintained.   Often incorrectly referred to as “the Vatican”, the “Holy See” is not the same entity as the “Vatican City State”, which came into existence only in 1929 because of the Lateran Treaty; the Holy See, the episcopal see of Rome, dates back to antiquity. Ambassadors are officially accredited not to the Vatican City State but to “the Holy See”, and Papal representatives to states and international organizations are recognized as representing the Holy See, not the Vatican City State.